Giorgio Albertini was born in 1930 in Milan.
He gives himself to Art Informel for some years, then understands that artists in the twentieth century have to deal with photography.
In fact, the idea we have of today’s world is always filtered through the new techniques for the reproduction of images.
The series titled “London Inclusive Tour” takes inspiration from the photographs of tourism promotion. Albertini wants to highlight that the reality we are used to is falsified. We believe, for example, that we have to do with an authentic changing of the guard, instead, we are simply participating in a tourist ritual, surrounded with all that is inauthentic and kitsch.
Albertini executes other series of works, namely, “The Old West”, Nudes and also Still Lives which, though showing the influence of Flemish art, carry an imprint of contemporaneity.
Over the course of years, Albertini, through his beautiful diptychs and triptychs, seems to reach the zero grade of painting.
The premises are not so different from those of Arman, who squeezes tubes of colors directly onto the canvas, then fixes them with resin. The only difference between these two artists lies in the fact that Albertini rejects the technique of objet trouvé, the technique adopted to transform a found object into a conceptual work of art.

The focus of his artistic research has always been the relationship between painting and photography. He therefore created paintings with “Mountains”, “Landscapes” and “Reflections” as subjects, with a great attention to details.
Towards the end of his career, with his triptychs and diptychs, he combined in the work images of flowers and colours, free to run through the canvas, in two separate sections.
Over his long career, besides painting on canvas, with a preference for acrylic, he also realized beautiful drawings. 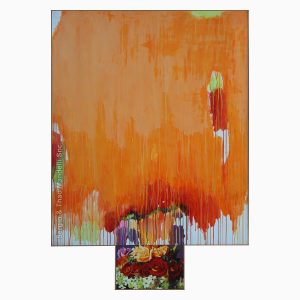 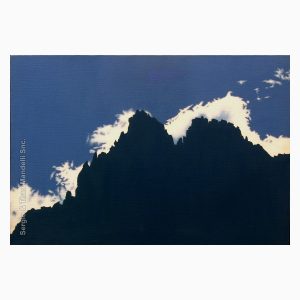