Giancarlo Montuschi was born in Faenza in 1952. His passion for comics leads him to integrate the Anglo-American cultural references in his art.
In Bologna, he encounters Concetto Pozzati and gets inspired by Pop Art.
His understanding of esotericism provides him with all the components necessary to create his signature style.
He produces some series of paintings, on paper or on wood, which feature archetypal symbols, such as stars, fish and the black sun, one of the most recurring symbol. His art is characterized by the brown hues and various insertions made of wax or ceramic, which sometimes represent heads seemingly emerging from the excavations of archeological sites.
In a series of work realized on canvas, he makes use of animal symbolism.
In his latest production, Giancarlo Montuschi merges alchemy with Pop art, which gives rise to the inexhaustible intertwining of personal symbols; wearing cone-shaped hats, his figures painted in blue, a color inexistent among the ethnicities of the human race, represent the spiritual essence of all humanity. His animated landscapes, recalling the psychedelic visionary world of the 1960s, thus underline the interweaving of various mythologies: alchemy and esotericism are blended with the myths of the show business.

Giancarlo Montuschi merges his research on esoterism with his passion for the Anglo Saxon culture, especially the transatlantic one, characterized by the myths of cinema and cartoon characters.
He adopts acrylic paint on canvas.
Importantly, he produces sculptures in raku ceramic in his atelier in Anghiari. 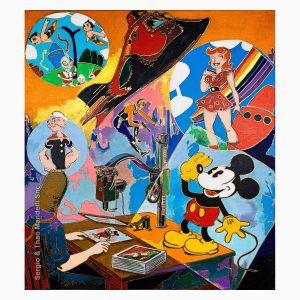 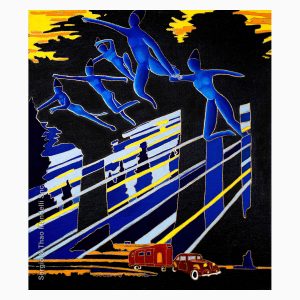 Angels in the Forest