Barbara Nahmad was born in Milan in 1967.
Her parents belonged to the Hebrew community in Egypt; they had to abandon Cairo in 1952 after the antimonarchical coup d’état.
Barbara Nahmad gets a diploma in set design at the Brera Academy and is assigned to realize a series of illustrations for a medical magazine. It’s through this experience that she decides to dedicate herself to painting.
The first subject she wants to deal with is her body itself, which is first photographed, then painted on the canvas.
Later on she finds interest in the world of pornography in the magazines of paid advertising, an unlimited source of models to be reproduced.
After the attacks on the Twin Towers in New York in 2001, her approach to life has suddenly changed. She realizes that behind that catastrophe there’s not only one nation, but the entire Western civilization that the Hebrew community has contributed to build up.
These reflections induce the artist to create a series of paintings focusing on a sort of Pantheon of celebrities, taken from daily life or from the art world, which have participated in setting up the collective imagery of the Western society.

The first subject Barbara Nahmad wants to deal with is the body itself, which is first photographed, then painted on canvas.
Later on she approaches the world of pornography, the one present in magazines of publicities on payment, an unlimited source of models to reproduce.
Her approach to reality takes on a sudden change after the attack at the Twin Towers in New York in 2001.
Barbara Nahmad realizes that underneath that catastrophe there’s not only one nation but the entire European civilization.
She therefore stages a kind of pantheon of personages that have contributed to set up the collective imagery of the western society.
In this context, she produces a body of work titled “The Kiss”.
Her works are acrylic on canvas. 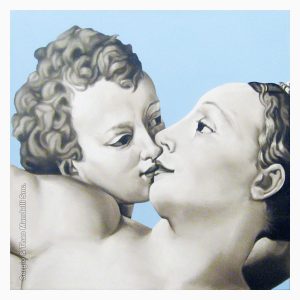 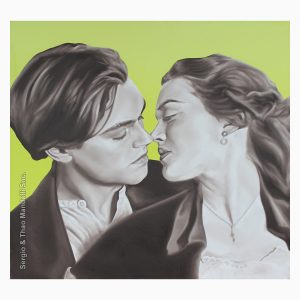 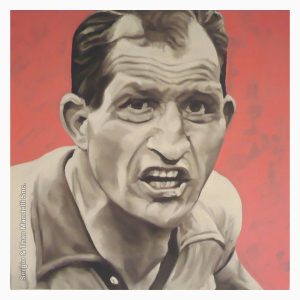