Tetsuro Shimizu was born in Tokyo in 1958, in a moment when Japan was facing a traumatic identity crisis.
Paradoxically it’s only after confronting himself with Western Art that he discovers his true inspiration by interpreting in his own way Titian’s and Cézanne’s art.
First of all, Tetsuro Shimizu digs deep into the Japanese concept of “Mujo” -“impermanence”- which refers to something that once existed, but no longer does and in some ways, has left a trace.
Therefore the artist considers the canvas a symbol of the physical world and painting the spiritual one.
Day by day, as the body undergoes several changes, so does the canvas, characterized by splits, scans and blank spaces.
Apparently he manifests his affinity for art informel; but in reality his work requires an accurate planning process, executed first with preparatory drawings.

Tetsuro Shimizu’s works are typically realized on the canvas frames modelled by the artist himself; these frames, in fact, with their shapes and splits, serve to give the proper emotional tone to his creation.
The artist then stretches a thick jute canvas onto the frame, a space where he fills with colors to generate different emotions, leaving also some areas unpainted. 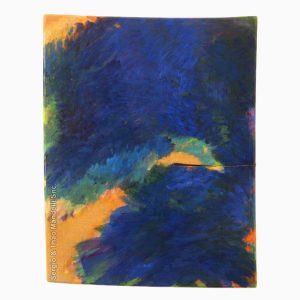