Claudio Malacarne was born in 1956 nearby Mantua. Since early childhood he is so attracted to Impressionists’ works, that at 15 he decides to devote himself to painting. He finds his style first in Sorolla’sworks, then in Eric Fischl, often devoted to water environments.
Inspired by the coasts of Salento, he starts painting kids at the seaside, topic that dominates his creativity in an exclusive way.
The water world turns into a metaphysical realm. Water becomes the primordial element, the very place from where life arises.
The swimmers’ bodies seem to be immersed in an infinite space where they can rock, in a supernatural state of well-being.
His paintings show a solid structure, represented by rapid, decisive, controlled brushstrokes, while the colour is often left unfinished.
The shot is cinematic, from a bird’s eye view.
Despite his Impressionist origin, the artistic conception of Malacarne does not satisfy only the eye; on the contrary, it forces us to explore a mental space, a realm where the supreme existential questions are asked.

Since the beginnings, his preferred technique is oil on canvas.
In more recent times he loves to explore also different surfaces, like stainless steel and plexiglass.
The principal subjects are people at the seaside; however, he also paints landscapes and animal figures.
Moreover, the artist is available to work on commission. 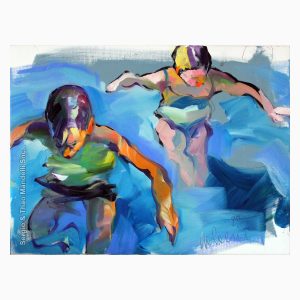 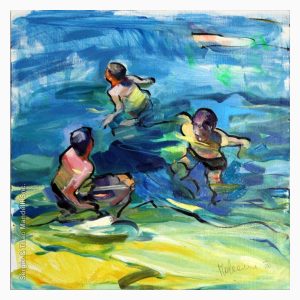 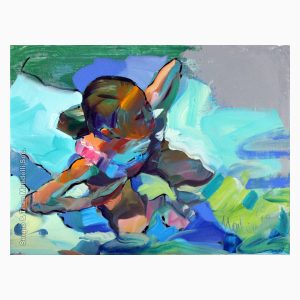