Luciano Minguzzi (born in Bologna in 1911; died in Milan in 2004) is one of the greatest 20th century sculptors .
What determines his biographical growth and artistic development is his overwhelming discovery of female sexuality. But above all, it’s through his experiences during the Second World War, witnessing deaths from bombardments and massacres of partisans, that he has created his signature style.
Luciano Minguzzi’s art persistently bespeaks an aesthetic attraction towards all aspects of life that are normally hidden, such as sex, wounds, death, all the elements in which he can retrieve primeval force to move nature.
Though a convinced atheist, he often tackles sacred themes, which make his sculptures seen as emblema tic of visceral existentialism.
Among his masterpieces are the Fifth Door of Milan Cathedral and the Door of Good and Evil in Saint Peter’s Basilica.

Luciano Minguzzi is one of the greatest 20th century sculptors. He is known for his bronzes – panels used to construct famous doors or, more often, all round sculptures characterized by the harshness of the forms and contents. Precious are his wood sculptures. They are preparatory pieces for the subsequent castings, therefore they are of great artistic value. 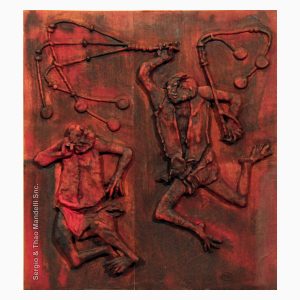